Q&A: How to avoid ‘Teflon’ chemicals in your water – and elsewhere

With news that New Jersey is second among the top 13 states where tap water may be contaminated by so-called “Teflon” chemical compounds has people asking how they can protect themselves.

The chemicals, called PFASs, are suspected of causing testicular and kidney cancer, along with throwing off the body’s metabolism to produce obesity and elevated cholesterol.

Scientists at Harvard T.H. Chan School Public Health mapped which watersheds were likely to have some contamination from the chemicals, based on where tests of drinking water had revealed their presence. Because of New Jersey’s industrial background, much of the state could, in theory, be at risk.

We asked Laurel A. Schaider, an environmental health researcher with the Silent Spring Institute, and one of one of the authors of the study, some questions about ways that people can steer clear of these problematic compounds:

Q. How can people learn if these chemicals are in the water they drink at home? Is there a home test available, or would they have to arrange for commercial testing?

There are no home tests for measuring PFASs in tap water.

From 2013 to 2015, the EPA required large public water departments that serve over 10,000 residents to test for six different PFASs. This testing occurred as part of a broader nationwide screening for unregulated contaminants called “UCMR3.”

If you want to find out if your public water was tested, contact your local water supplier or board of health and ask. Results from UCMR3 testing may also be included in the annual Consumer Confidence Reports from your water supplier, which are sometimes available online.

There are a couple of limitations to the UCMR3 testing. First, the detection limits were relatively high, and in addition, the vast majority of small water supplies (serving under 10,000 people) were not included. Nor were private wells, which are relied upon by one-third of Americans.

Q. Do those filters you attach to your faucet filter out PFASs?

As with any filter, it’s important to change the filters according to the recommendations to prevent chemicals that have accumulated on the filter from leaching back into the water.

Q. Would a higher-grade filter do the job?

Q. Is there any danger from bathing in water that has some level of PFASs? For example, would there be any risk to giving a child a bath if this compound were an issue in your water supply?

In general, drinking tap water is likely a much larger source of exposure than bath water.  PFASs, like PFOA and PFOS, are not volatile, so you’re less likely to breathe them in during showering. Nevertheless, if your tap water contains high levels of PFASs, you may want to take steps to reduce ingestion of water while bathing or showering, especially for children, who are particularly sensitive to health effects of PFASs.

Q. What do you advise people to do if they’re worried about PFASs?

People can learn where their drinking water comes from and find out whether any testing has been conducted on their water supply. Water supplies are more likely to contain PFASs if they’re near industrial facilities where PFASs are used or produced, or if they are near airports and military fire training areas where PFASs are often used in foams to put out fuel fires.

PFASs are also present in many household products that have stain-resistant, grease-proof or waterproof coatings. Here are some additional tips for reducing our exposure to PFASs:

Q. One final question: This study focused on chemical compounds in water. But what about non-stick cookware? Doesn’t it expose you to the same stuff?

PFOA, also known as C8, is a chemical used in the production of Teflon, and can be formed from the breakdown of Teflon. PFOA has been associated with a range of human health effects, including kidney and testicular cancer, thyroid disease, and immune suppression. Because of concerns about health effects, U.S. manufacturers have phased out the production of PFOA, although it continues to be produced in other parts of the world.

Some cookware  now contains labels such as “PFOA-free” or “PTFE-free” (PTFE is the chemical name for Teflon), although these products may contain other fluorinated chemicals. To avoid fluorinated chemicals in cookware, consumers can select pots and pans that are enameled or ones that are made of cast iron, stainless or carbon steel, or anodized aluminum. 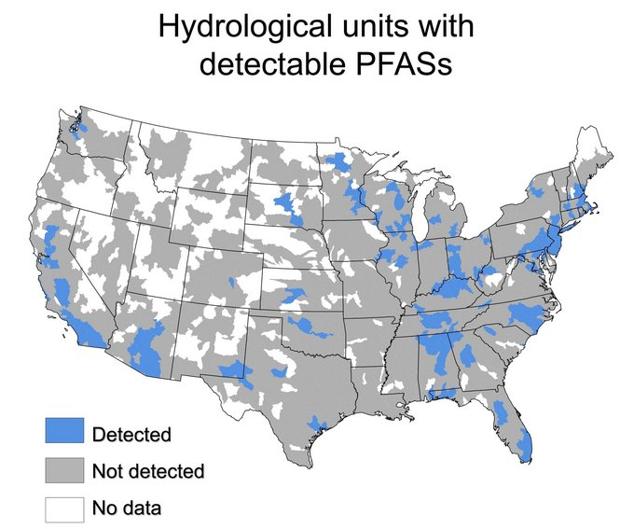